Compared to print and television, you’ve always provided us the greatest bang for the buck when it comes to maximizing our advertising dollars. Thanks!

Be A Madonna – Embracing Change to Stay Relevant
– Stephanie F Dickinson, May 2019 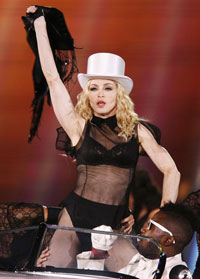 There’s a lot you can do to have a successful Springfield business. But to sustain it for the long-haul, you’ve got to be a Madonna! Madonna has ‘reinvented’ herself over 14 times during her career; and as a result, she is a relevant, touring artist, even to this day.

It is important that Springfield businesses be willing to shift directions to stay ahead of the curve with the changing interest of their target audience. Pay attention to the way people are consuming information, watch lifestyle trends, and move accordingly. In Short, Be a Madonna.

Madonna was signed by Sire records in 1982, releasing her first hit album in 1983. She stayed ahead of the trends, was hyper-aware of her audiences’ peaks and valleys, and moved swiftly to take advantage of opportunities that would allow her to remain on top of the charts for decades. And to stay on top, this often means shifting gears completely – from actress to musician, back to actress (and this time taking home an Oscar for her role in ‘Evita’, in 1996) and then again topping the charts in the music industry before opening her own record label.

Music Machinery’s Paul Lamere points out that the average music artist’s career length is 17 years. Madonna’s willingness to reinvent herself over and over again has led to a 37-year career that is still in full-swing, with her “Madame X” tour kicking off this September (2019).

C-Level Springfield executives and business owners “we’ve always done it this way” mentality eventually depletes revenues and leads to the inevitable demise of thousands of businesses across the US. Mark J. Perry at Carpe Diem AEI notes that as of 2014, 88% of the fortune 500 firms that existed in 1955 are gone. Embrace change, and be willing to Re-invent your model, structure, or brand and you may find yourself far outlasting your competitors and the statistics of your industry!